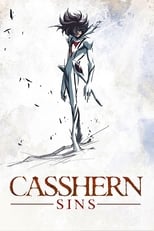 In the distant future, where cyborgs and humans struggle to survive after the war which destroyed the world, a being in white suit awakens. His name is Casshern and he remembers nothing of his own past. In barren and dark dystopian world, where every being alive seems to hate his existence and the evil from his past wants him dead, Casshern, haunted by the flashes of his past memories has to survive and figure out who or what exactlyhe is and how he got to where he is now. But he does not know that he might not like the horrible truth of the past, hidden deep inside his mind...Created as an intended reboot of Casshern franchise.
Nonton juga anime ini:
The King’s Avatar Live Action (2019)Fullmetal Alchemist (2003)Bloodivores (2016)Gundam Build Divers (2018)Dies Irae: Reimei (2017)